Take a look at the Snap weekly chart. A clearly defined bull flag has formed that suggests significantly higher prices. 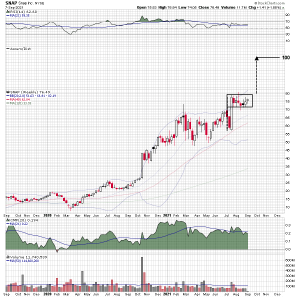 In July there was a spike up in price, followed by two months of sideways consolidation. The “spike” is the flagpole of the pattern and the range-bound movement between ~$80 and ~70 is the flag. The bull flag pattern has a target price that is measured by taking the height of the flagpole and adding it to the top of the flag. In Snap’s case, this methodology targets the $100 level. A large round number which like similar numbers has a “magnetic” quality the closer you get to it. Obviously, there is no technical reason for this, it is purely psychological. 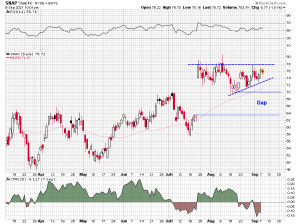 On the Snap daily chart we see the July flagpole as a very large gap higher. That gap is still open and at some point it may be filled. If and when it happens is impossible to say at this point. On closer inspection the sideways ‘flag” movement has been a combination of higher lows under firm overhead resistance in the $78 area. A series of hammer candles have defined the uptrend line inside the flag and the 50 day moving average is moving in parallel to it. The Relative Strength Index is flat but tracking above its center line suggesting steady positive price momentum. The Chaikin Money Flow indicator is in negative territory and that will need to improve in order to sustain a breakout and subsequent higher prices.

The bottom line on this Snap analysis is to watch the $79 resistance level. A strong break above it suggests the potential for a move to $100.